This wooded, steeply rolling 208-acre tract bordering the Rock River, is identified with the Sauk nation and the warrior Black Hawk. This was the westernmost battle of the Revolutionary War.  In 1927 John Hauberg was key to the creation of a State Park. In 1933-35 the Civilian Conservation Corps built hiking trails, two picnic shelters and much of the present-day Watch Tower Lodge. An exhibit about the CCC is found in the Lodge and houses the Hauberg Museum which has full-size replicas of Sauk winter and summer houses and dioramas showing activities of the Sauk and Meskwaki typical of the period 1750 to 1830. The illustrated book Twelve Moons: A Year with the Sauk and Meskwaki, 1817 – 1818 is available at the Museum.  The Lodge’s large main room with two massive stone fireplaces and original woodwork is popular for wedding receptions. In 1972 Citizens to Preserve Black Hawk Park Foundation was formed for support. In 1979 the Park became a State Historic Site. In 1984 the north forest was declared a Nature Preserve.

As Featured in Eat & Explore Illinois 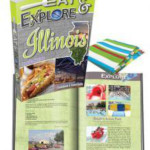